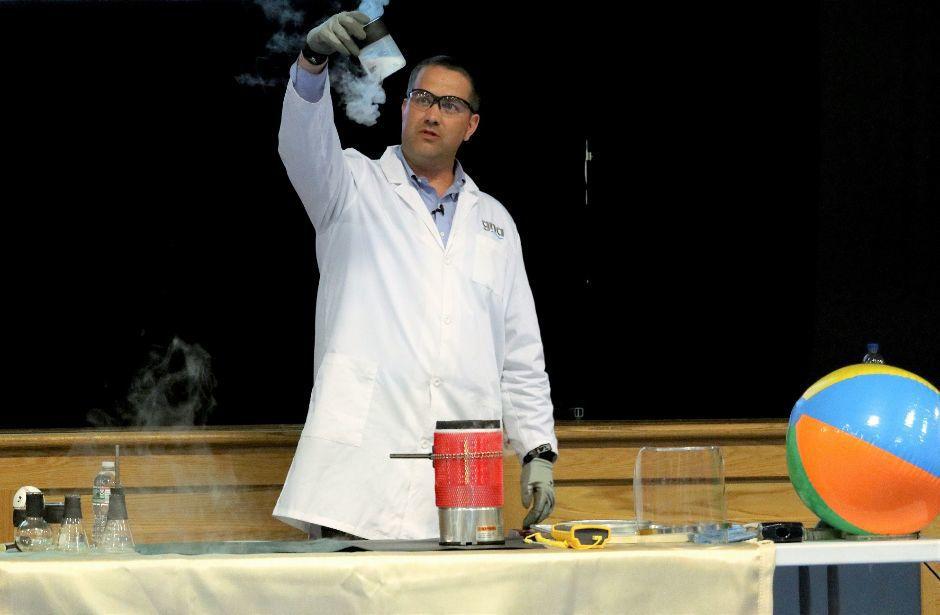 EPPING NH — Proponents of the proposed Granite Bridge natural gas pipeline and storage facility in Epping are trying to build support for the project as the state’s Public Utilities Commission prepares for a final hearing in early December.

The plan by Liberty Utilities that calls for a pipeline along Route 101 from Exeter to Manchester with a 170-foot-tall storage tank in an abandoned quarry in Epping has raised safety concerns among some residents, but the company recently held a liquefied natural gas (LNG) demonstration that it hoped would ease some of those fears.

“There are a lot of misconceptions about what LNG is and how safe it is. We wanted people to see how LNG works,” said Huck Montgomery, manager of government affairs for Liberty Utilities.

According to the utility, Granite Bridge would connect two existing natural gas pipelines in Exeter and Manchester, and could help meet the state’s growing energy needs.

Liberty Utilities officials insist it would minimize impacts to the environment and private property.

The pipeline would be constructed in the state right-of-way along Route 101.

While final decisions on the project rest with the PUC and the state’s Site Evaluation Committee, the town of Epping has filed as an intervenor, and views will be shared before the project is approved.

If OK’d by the PUC, Montgomery said the company will file plans with the SEC for review.

The push for Granite Bridge has come at the same time that the Northern Pass project faced defeat and was eventually pulled off the table by Eversource.

Last month, the state Supreme Court unanimously denied a request by project officials to order the SEC to reopen deliberations.

“We know the Site Evaluation Committee sets a really high bar for approval for energy infrastructure projects, and that’s how it should be. Every aspect of Granite Bridge is designed not just to meet expectations — whether those are the expectations of our host communities, members of the public, or state and federal regulators — but to exceed them.

“We’re very confident we can make a strong case to Granite Staters and to the NHSEC that Granite Bridge is the right project to bring clean, low-cost energy to New Hampshire homes and businesses,” Montgomery said.

The Granite Bridge proposal has received a lot of attention in Epping as Liberty Utilities is proposing a large storage tank just off Route 101 near off Exit 6.

If approved, Liberty Utilities said the storage facility would allow the company to buy natural gas when prices are low and store it to be used when prices increase, which officials maintain would save customers money and increase reliability, especially in the winter.

Erik Neandross of Gladstein, Neandross & Associates (GNA), which is headquartered in Santa Monica, Calif., and New York City, performed the safety demonstration for the public at the July 31 event at Epping Middle School.

Neandross, a former firefighter with specialized training in LNG spill control and fire suppression, said the live demonstration showed people the physical properties of LNG and how it will and will not behave in certain circumstances.

“One of the most common misperceptions about LNG is that a tank full of it will explode. The demonstration uses basic physics to demonstrate why LNG will not explode. While natural gas will ignite under certain conditions, which we fully explain and demonstrate in the live presentation, there is no risk of the LNG tank exploding or anything even close to that,” he said.

Neandross said LNG has “one of the most enviable safety records of any product or industry in the world.”

But some opponents are still skeptical and worry about potential impacts.

Jennifer Dube is a pipeline resistance organizer from 350NH, a group that opposes fossil fuel infrastructure.

Dube lives in Raymond, which is a town along the pipeline route, and said she worries about environmental impacts and safety.

“Raymond does not have the resources to respond to a hazardous materials incident. Gas is highly flammable and any incident would likely necessitate a large-scale evacuation and involve multiple agencies and jurisdictions. Raymond’s economy would suffer and residents would be left to absorb the costs,” she said, adding that the public should be demanding “clean and renewable sources of energy instead of harming our environment by clinging to fossil fuels, which are quickly becoming obsolete.”